A while back I mentioned L was having some imaging done, and then I casually dropped the fact that we may be facing another big surgery into a nice little feel-good story that turned out to be a not-so-subtle mention since everyone and their mother ended up reading it! So, now that we have some concrete plans on the table, I figured it was time to circle back and dig in to what exactly that means.

L’s gut is dilated. It’s far bigger around than it should be, and it has gotten significantly worse over the last couple years. That means that instead of pushing its contents along like you would expect, when it squeezes the stuff in the middle just kind of sits there, or some of it might actually go backward instead of forward, and that also allows normal gut bacteria to build up into not-at-all-normal amounts. Because of all this his gut (which is already at a disadvantage because such a big part of it is missing) definitely doesn’t digest the way it should.

We’ve tried a few things to push his nutrition in the right direction, and we haven’t seen the results we needed. So he’s back on TPN, and we’ve been talking about surgery to correct the dilation, and now that surgery is scheduled for four weeks from today.

There are two options: STEP and Bianchi. Both of them narrow the dilated gut to a more typical circumference, and at the same time increase the length of the gut, with the goal of dramatically improving bowel function.

The Serial Transverse Enteroplasty (STEP) procedure was pioneered at Boston Children’s Hospital, and as they helpfully explain, “the STEP procedure relies on the simple anatomic principle that the blood supply to the small bowel travels from the mesentery and traverses the bowel perpendicular to its long axis. In the STEP operation, special devices are used to simultaneously cut and staple the bowel in a direction parallel to this plane.” Got that? It’s simple anatomic principles.

Basically what that means is that in the much-wider-than-it-should-be tube of the dilated small intestine, they make a series of small cuts along each side that, when sealed with staples, make a narrower zig-zag tube out of the formerly wide straight tube, like so: 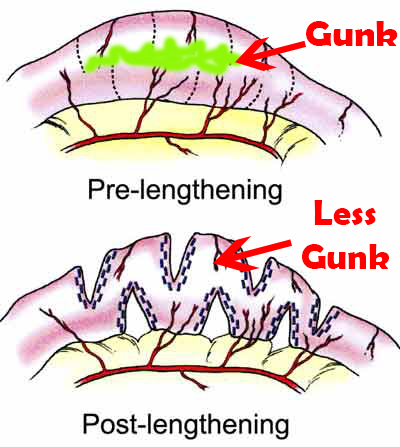 The Bianchi Procedure is a slightly older procedure that essentially takes the dilated tube of the bowel and cuts it lengthwise (if you can dig back to elementary school art class, that would be hot-dog style) and makes two narrower tubes out of the one wider tube, then sews them together end to end so you wind up with about half the width and twice the length. For your viewing pleasure: 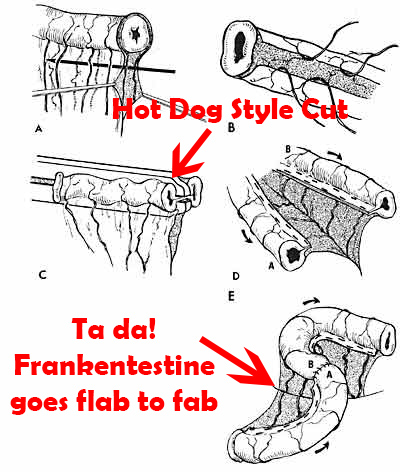 The STEP seems to be increasingly popular, but for a number of reasons that we are completely in agreement with, our surgeon prefers the Bianchi for L if possible. It doesn’t lend itself to punny blog titles quite as well, but the Bianchi does have a slightly lower risk of complications, and if it’s not successful, it’s much easier to do a follow-up STEP after a Bianchi than to do a Bianchi after a STEP. But either could be tremendously successful for us, and that will ultimately be a game-time decision in the OR.

The neat thing about these surgeries is that, if all goes well, he will not only end up with a much narrower and more efficiently-functioning gut, but also with as much as (nearly) double the length in his small intestine.

The less neat thing about these surgeries is that there is a 5-10% chance of a number of complications that adds up to about a 20-25% chance of things not going 100% smoothly. This is not comprehensive, but potential complications include:

The bright side to both of these possibilities (although what’s not bright about abscesses and ostomies, amiright?) is that even if he ends up losing more gut, it should still work better. In theory, we’re working from a post-op ideal outcome of double the gut, so losing half of that would put us at the same amount of length but much narrower, and so much more functional. In theory.

The other fairly obvious complication, if you can call an expected outcome a complication, is that his gut will have to re-learn some things. We’ll be essentially starting over with feeds, moving to 100% TPN for the week or so after surgery and then slowly adding in oral and enteral (tube) feeds. The goal will be to gradually shift the ratio of calories he’s receiving from TPN to oral/enteral, and eventually come off of TPN altogether.

He may bounce back relatively quickly, but it could also be a very slow process. This is a wait and see kind of thing. Hello again, NOT KNOWING.

It’s scary. Recovery will probably be frustrating. It’s possible this will leave us in a worse spot than we are in now, and it’s difficult to choose something that has a chance of a worse outcome, especially since L feels great since he’s been back on TPN. But the reality is that if we do nothing, he will continue to have immense nutritional struggles and difficulty growing, and sooner or later he would wind up with liver damage from long-term TPN and then might need small bowel transplant or liver transplant or both, neither of which are likely to be as successful as the STEP or Bianchi are likely to be. And there’s a 75-80% chance that he will fly through all this with absolutely no significant complications at all.

This is our next step. It’s a very big step, and it’s very likely to be a step in the right direction. It could be huge for L, and for all of us. This surgery is scary, and difficult, and overwhelming, and it’s hope.

2 thoughts on “Adventures of Frankentestine: The Next STEP”