When my post about the Cardinals usher helping us find milk went viral, the Cardinals and the local news and various other people tried to contact the usher, but no one could get in touch with him in time to include him in the coverage that was popping up right and left. I was bummed that it seemed we had missed the opportunity to properly recognize him despite all the coverage, and I was also worried he didn’t want the attention 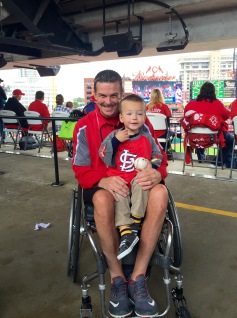 I had inadvertently brought him.

This past Saturday the Cardinals brought us back to the ballpark for an interview, and we were finally able to reconnect with the kind soul at the heart of my little story. It turns out he had been out of town and off the grid for the weekend, and had no idea he had become so famous until he saw the abnormally large number of notifications on his phone when he returned!

The usher – his name is Scott – was there in section 267 to meet us, with a goody bag for L stocked with a baseball, a Fredbird pennant, a Cardinals Build-A-Bear and plush Clydesdale, stickers, and a shirt to grow into – and, of course, a bottle

of milk (although rest assured, world, we came fully prepared this time and will probably never go anywhere without milk ever again!).

Scott and his wife proved to be just about the nicest people I’ve ever met, and we were thrilled to be able to thank them in person and offer an actual thank you card complete with original fire truck illustration by L (because a fire truck expresses the very highest form of gratitude, obviously).

We did spend most of the game walking up and down all the stairs and ramps in the stadium searching for Fredbird (whom we found not one, not two, but three times, because once just wasn’t enough), but we also managed to see all the runs that w

ere scored and actually stayed for the entire game (innings 8 and 9 brought to you by Disney Toys Review on YouTube. I have no regrets).

Big thanks to Scott and to the Cardinals, and even more so because this outing couldn’t have come at a better time. We have taken it upon ourselves to have Epic Weekends leading up to L’s big surgery next week; Saturday was baseball and a birthday party, and Sunday centered around football, the fire truck playground, and filling the bathroom sink with shaving cream (L’s request). On the docket for next week: breakfast at The Restaurant with the Car Playground, a trip to the pumpkin patch, and, most fun of all, a bowel prep (who’s jealous?).

Stay tuned for our story in Cardinals Insider in a week or two! 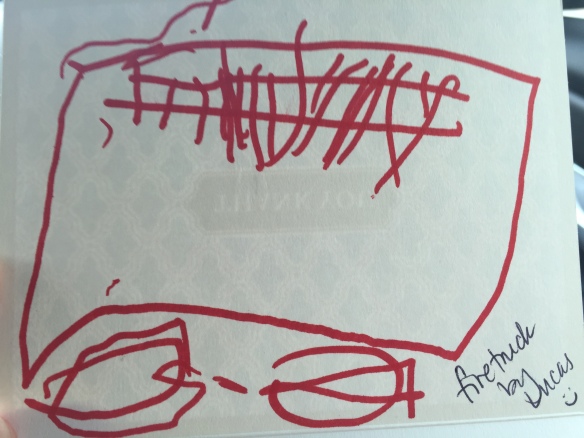 2 thoughts on “L goes back to the ballpark”