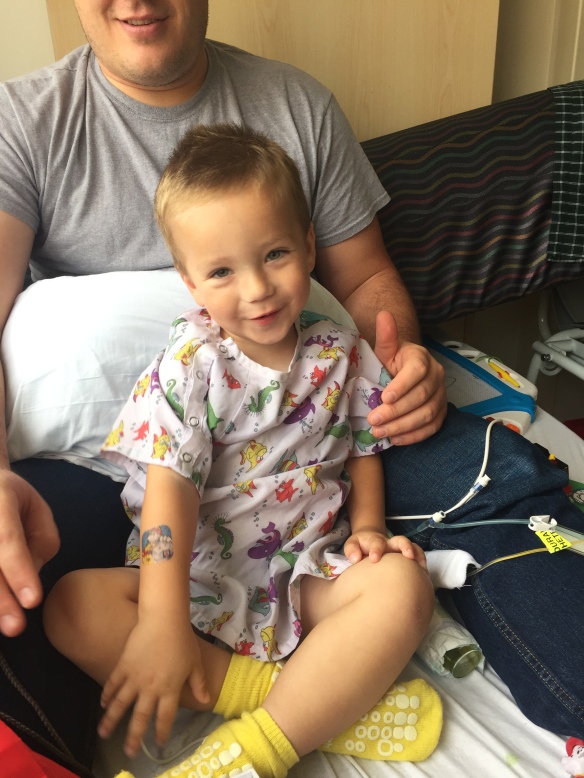 I thought I might be able to blog a bit as we went along, but it turns out that instead of knocking him out for a few hours at a time, morphine makes L feel FANTASTIC and not nap and stay up until 11:00 giggling and telling me all his secrets, so I haven’t had much downtime in the last week! So here’s a brief summary of what happened during surgery, and I’ll try to come back and fill in more as time and L permit.

He decided against the lengthening technique for two reasons:

Since lengthening is riskier and he was happy with the amount of small bowel he found, he just tapered (narrowed) the section that was dilated rather than doing the lengthening procedure.

But he did also open up a stricture (place that’s much narrower than it should be) at the point where small intestine meets large, which had been surgically reconnected in 2013, that was preventing things from flowing through properly and so was causing some backup inside his gut that probably ultimately caused or worsened the dilation, and was almost certainly interfering with normal digestion.

Between those two things he’s hopeful this will make the difference L needs to eventually come off of TPN. We initially felt a little let down, probably irrationally, that we’re going through all this and didn’t actually do the procedure we thought we were doing, and we have concern that this still won’t fix the absorption issues and so still won’t get us off of TPN. But we’re trusting him for now. And we should be looking at this as a less risky procedure that might prevent us from having to do the riskier surgery, with the idea that we may also be able to come back and do a lengthening procedure at some point in the future if necessary.

Recovery from the tapering procedure remains pretty similar to what we expected going in – it’s just less likely to involve additional complications (things that would prolong our stay, prevent the improvements we’re hoping to see in his nutrition, and/or would have resulted in lost bowel in the OR or afterward).

For anyone following along because you may be facing a STEP, Bianchi, or other major intestinal surgery yourselves, stay tuned for a more detailed timeline of the first week post-op. And thank you all, so much, for all of your support through this past week and beyond.