On this day last year, we were at the hospital.

(Are you starting to see a theme here?)

One year ago today we had to have L’s line replaced. It was a Wednesday, and we had spent all day that Monday in the ER trying to clear a clotted line to no avail. Since that Tuesday was the day Santa came to L’s school, and also the day we were having out-of-town friends over for dinner, and also the day I had a big job interview, they agreed to let us wait until Wednesday for line replacement surgery.

All of this coalesced at exactly the wrong time, and so it was we found ourselves in search of a Christmas tree on the afternoon of Christmas Eve.

We had meant to go get our tree a number of times in the weeks leading up to Christmas, but between weekends of travel to early holiday celebrations and multiple hospital admissions for fevers and a jaunt to same-day surgery for ear tubes, we kept putting it off. The delay wasn’t a big problem for our holiday preparations because we don’t decorate the tree until Christmas Eve, anyway, because we’re weird like that. We had planned to finally for-real-this-time go on the Monday before Christmas, but that turned into the aforementioned trip to the ER instead. And because I was paid hourly at the time, and had already missed a number of hours of work for ER + job interview + line replacement surgery on the most expensive week of the year (thanks a lot, Coca Cola Santa Claus), I went in to my office on Thursday – Christmas Eve – until it closed in mid-afternoon.

And so, around 4 pm on Christmas Eve, we set out in search of a tree.

It had become a family tradition to get our tree at the Ted Drewes lot, because who doesn’t think it’s a great idea to eat frozen custard while freezing your tuchus off outdoors in December? Plus, they put a whole slice of pie in their pumpkin pie concretes. A WHOLE SLICE*.

*This post is not sponsored and all opinions are my own. But if Ted Drewes wanted to sponsor this post (hint, hint), I would eat the shit out of some free pumpkin pie concretes.

But when we pulled in to the Ted Drewes lot, it was bare.

Only mildly daunted, we climbed back in the car with a sprig of mistletoe and a pumpkin pie concrete (it’s tradition, after all) and headed up the road to a little local garden shop we knew had trees on their lot. But as we pulled up, we saw a truck loaded up with the last of their Christmas trees pulling out of the parking lot.

Seeing as how it was approaching evening on December 24, we realized that this might be our last chance at having a Christmas tree that year and did the only logical thing we could think to do at that moment – we followed the truck. We tried pulling up next to it and waving our arms like maniacs; they didn’t notice. We tried to wait it out to see if they would pull into a gas station; they didn’t. We followed them all the way out of the city in hopes that we could not-at-all-creepily ambush them at their destination and talk them into selling us one of their remnants, but they just kept driving. Finally, we lost them at a poorly timed traffic light and realized we needed to move on to plan C.

We headed to the closest Lowe’s and inquired about their remaining fresh Christmas decor – Nada. Zilch. Zero.

At this point I was starting to fear that our procrastination and bad medical luck had ruined Christmas on the first year L was old enough to actually know what was going on, but Z kept a cool head and began making calls, and at last managed to find a Home Depot several miles away that was still open and had not yet gotten rid of the remnants of their holiday cheer.

I don’t know if you’ll want any of what we’ve got left, they said. But if you come right now, we won’t load it up until you get here.

Away to Home Depot we flew like a flash, rushed to the garden department and checked out their stash. And what to our wondering eyes did appear, but … the sorriest collection of scraggly, squatty, half-dead trees that ever has existed ever.

Per tradition, we inspected our options and carefully select the biggest, most magnificent tree of the lot. It was barely as tall as I am (which is not saying much), and had so much fantastic space for ornaments! The kind souls at Home Depot sent us on our way free of charge, and in the spirit of the season gifted us a free (only slightly smushed and browning) wreath to boot. And as we carried our Charlie-Browniest of Charlie Brown trees out to the car, I imagine the other shoppers must have thought I was lamenting the pitiful merchandise we were walking out with — when in reality, I had tears streaming down my face because, after the madness of that week, I was so gosh darn happy we had a tree at all. 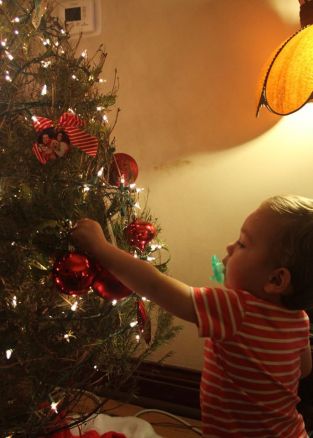 We took it home, and we decorated the crap out of it. One of us (not naming any names here) took special care to especially decorate the crap out of this particular spot right here which just happened to be about 2 feet off the ground.

And you know what? It was beautiful.

Whatever you are searching for this season, may peace and kindness find you and keep you warm. Happy holidays, from our Gutsy family to yours. 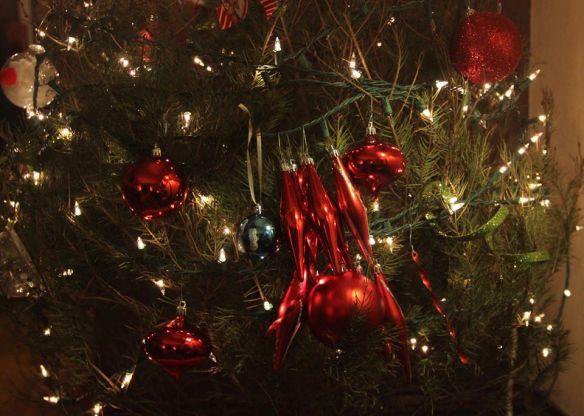