We’ve recently had our anatomy scan for #2, and apparently there’s this thing people do after anatomy scans that often involves a filled cupcake as the centerpiece of a big reveal. So, here we go, with much fanfare and drumroll and yada yada yada. 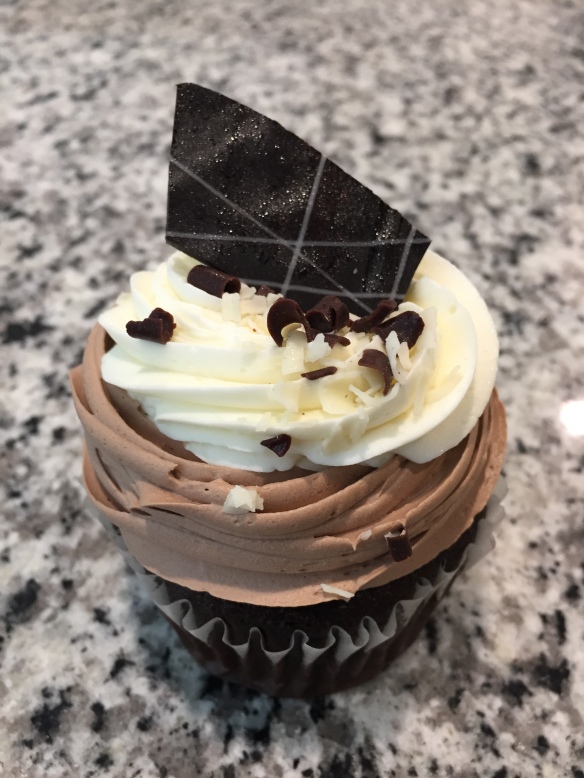 That’s right, that’s a filled cupcake with all the filling on the inside where it’s supposed to be.

That’s what this cupcake thing is about, right? No? Hmmm….

Due to our history, we also had genetic screening at 12 weeks and an ultrasound at 14 weeks to check on abdominal development, all of which looked great, so we went into the 20-week scan feeling pretty good and hoping the keep the streak going.

Of course, we couldn’t make things too easy on ourselves, so our results did come with an “Everything looks great! Except –,” at which point I think I died about 12 times in the span of half a second.

The “except” is that while most umbilical cords have two arteries and one vein, #2’s cord has only one artery and one vein. This is relatively common and happens in about 1% of pregnancies (so naturally it would occur in mine), and it occasionally correlates with some scarier chromosomal or cardiac or renal abnormalities — but thanks to the genetic testing we opted for, we’ve got a green light in the chromosome department, and all other organs checked out at the anatomy scan, so odds are high that this is one of those random things that just happen sometimes, and is unlikely to affect anything else.

It’s like my body is saying, “Heyyyyy, I know last time I effed up and made the umbilical opening too big — that’s my bad. I’mma go ahead and make this one a little extra small to make up for it, m’kay? That makes us even?”

No, body, not exactly. But keep the rest of your shit together this time and I might let it slide.

There is a chance that this two-vessel cord could impair growth as the pregnancy progresses, so we’ll be doing monthly ultrasounds from here on out to check #2’s growth and development. If all goes well, we’ll proceed as usual with the added bonus of a few extra chances to wave hello to our little. If anything worrisome appears on those scans, we may end up inducing a little early – but at the very least we should have a little more than two hours warning this time around!

I’m not going to pretend that I took this completely in stride – I’ve already spent plenty of time imagining all the sinister things that could be lurking beneath this seemingly-simple semi-complication, particularly given the fact that we received a completely clean report after L’s anatomy scan and look where that got us.

But I’ve also had the opportunity recently to spend a lot of time at work thinking and talking about the importance of being in the present; and I think this may be a reminder to me to embrace the present and save my worry for a time when it’s useful. Nothing is ever guaranteed; we were given some breathing room after that early round of testing, but here is a gentle reminder that we will never be completely in the clear because that’s not how life works – I imagine we know that better than most. But things are looking incredibly good for us right now; we know we can handle far more than we used to think we could, if things should take a turn for the worse; and it serves us best to focus on the fact that right now, I am pregnant and my baby is healthy, and to take each month as it comes.

Oh, and in case you’re wondering, the filling is brown. Delicious, glorious fudge. But #2 is a girl.

This is my daughter: 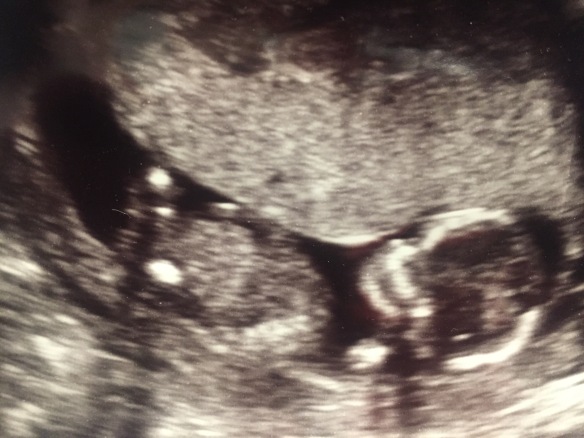 She doesn’t have a name yet, but her brother is already smitten with her. She appears to be healthy so far, and we’re hoping to meet her around Halloween.

This is my son:

His name is Lucas. He loves fire trucks, Star Wars, and Neil Diamond. He just turned 4.

You see, Lucas has a pre-existing condition. He happened to be born with gastroschisis – a randomly-occurring congenital condition that left a hole in his abdominal wall – and as a result he has short bowel syndrome. It cost more than $3 million to keep him alive in the first few months after he was born, and several hundred thousand more since then, thanks to 11 surgeries, daily at-home intravenous nutrition and tube feeds, home nursing care, frequent visits to medical specialists and various kinds of therapists, and so many hospital admissions that I’ve actually lost count.

You claim to be pro-life, and yet you support a bill that would make it impossible for us to afford coverage for the medical care my son needs to stay alive.

Gastroschisis often results in a C-section in order to protect the baby’s organs during birth. You claim to be pro-life, and yet your so-called “healthcare” bill would make mothers question whether they should have a medically necessary C-section and would threaten the future health of any mother who has had a C-section for any reason, because you’ve classified having had a C-section as a pre-existing condition that will price many families right out of the market.

You dangle the impossibly unrealistic carrot of “freedom of choice” in healthcare as though it were a pinnacle of American values, and yet you would force a woman to carry to term a child who is incompatible with life.

You claim to be pro-life, and yet your bill would make expectant mothers think long and hard at the end of the first trimester, when many congenital conditions are discovered, about whether they can afford to carry to term a life-long pre-existing condition. You would set parents up to make that decision based on their finances rather than their beliefs or prognoses.

You claim to be pro-life, and yet you would throw essential health benefits to the wind, leave 23 million more Americans uninsured, raise premiums for the elderly by as much as 800 percent, and cut $834 billion in Medicaid benefits for low-income Americans in order to give tax cuts to the wealthy.

You claim to be pro-life, and yet you have thrown the living to the wolves.

If you vote in favor of the AHCA, you are not pro-life.

If you believe that people’s right to life should not depend on their wealth, call your senators today and demand they vote no on the AHCA.