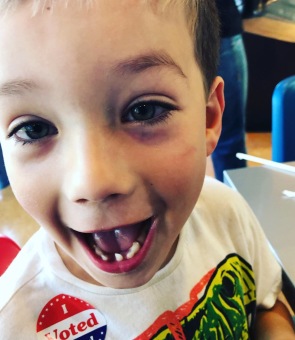 L has been working on a pair of wiggly teeth for months. They’ve been getting looser and looser, but they’d been hanging in for so long that I was starting to wonder if they’d ever actually come out — so when we sat down to lunch after a morning of adventures in the Science Center, I was shocked to see a gaping hole where his bottom right front tooth used to be.

“But I didn’t chomp anything crunchy, Mama!” he said, after shrieking with joy and surprise at the discovery of this new milestone.

I’m not totally convinced he doesn’t have a tooth working its way through his belly as we speak, but he was certain he didn’t swallow it, and more than a little concerned that the Tooth Fairy wouldn’t come visit him if he didn’t actually have a tooth to offer. So we made our way to the front desk of the Science Center, explained the situation to an incredibly nice member of their staff, and left my name and phone number on a pink post-it with “Lost tooth” noted in big letters.

I’m hoping she picked up on my “we don’t actually want this back” vibe. I will be incredibly creeped out if they call and say they found it, and can we come pick it up please.

In any case, L was consoled by this and made sure to write a letter to the Tooth Fairy to let her know that if she wanted to find his very first lost tooth, she’d have to visit the Science Center instead of his bedroom. And then he proceeded to lose another tooth that was threatening to topple over without the support of its neighbor – with a little help from Z this time.

In the morning, L was delighted and surprised to find this note outside his door attached to a mini Lego set, along with a couple bucks in the pocket of his Tooth Fairy pillow: 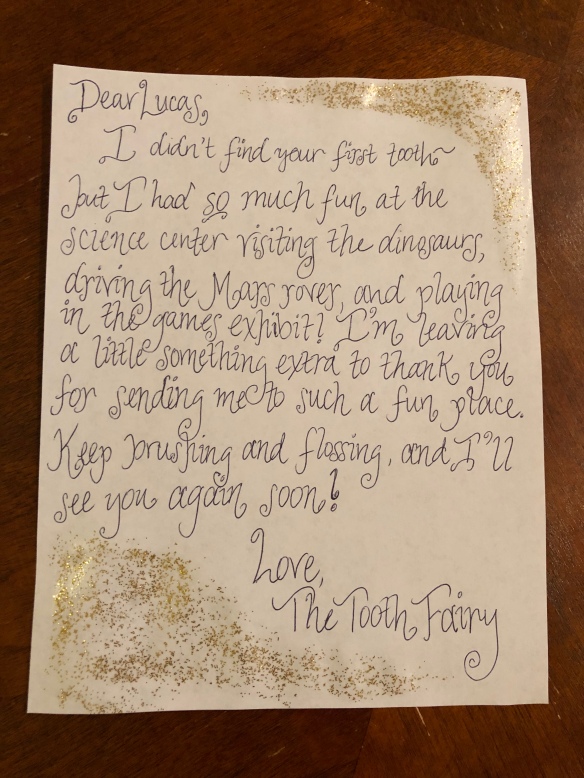 You might want to check your security cameras, Science Center. I think you may have had an after-hours visitor! 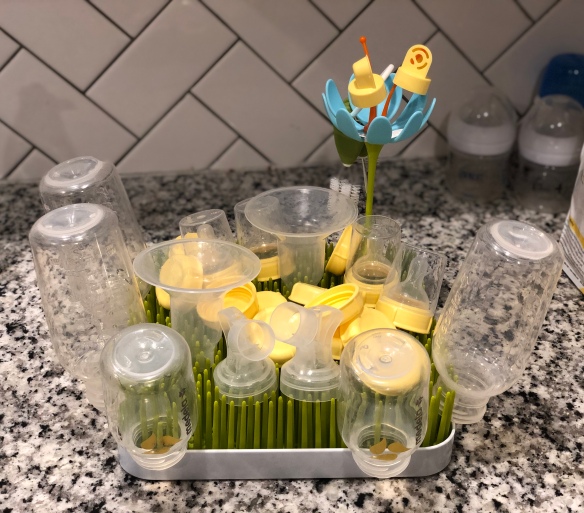 Under the Affordable Care Act, health plans are required to cover breastfeeding support & supplies. But when I was pregnant with L, I was a little unclear on the process required to get a breast pump covered by insurance. So I called the number on my insurance card to find out what I should do; I got a prescription from my OB/GYN and then called the insurance company again when the information I was receiving elsewhere didn’t seem to align with what the insurance rep had told me; I talked to a pharmacist and whoever answered the phone at some sort of home health supply store, with more conflicting results; I called my insurance company two more times to confirm that I was doing it correctly; and I called yet again after I submitted my reimbursement request to confirm that I had done it correctly.

And then I got a denial letter in the mail.

When I called our insurance company to object to this denial, they conveniently had no record of any of my calls. So I ate the cost of that $300 breast pump, because by that time L had been born and I was up to my ears in other, more pressing worries. When a nurse at my OB’s office found out what had happened, she connected me with someone in her office who submitted the paperwork for me to get a second pump free through insurance, so they would at least have to cover one for me even though I had paid out of pocket for the first, and I did receive a pump free of charge that I was able to keep on hand as a backup — but I had no choice in the type of pump, and received an model which shall remain unnamed that I like to call the “Purely Sucks,” which I used for exactly one day out of desperation when I had left my preferred pump somewhere and hadn’t been able to retrieve it yet, but which I’m pretty sure would have led to a failed attempt at exclusively pumping had I had to use the insurance-provided pump from the start.

So when I began looking into obtaining a new breast pump during my second pregnancy, I was determined. I was all set to arm myself with information and spend weeks fighting my insurance company to the death to get the proper coverage for the pump I needed. They would not win this round!

And then I discovered the Target Breast Pump Program, and within minutes, my pump request was in the works and I could save my resolve for the next insurance battle that was sure to come my way.

When I called, I spent maybe 10 minutes on hold and another 2 minutes speaking with a representative who took my information and got things rolling. Afterward, I faxed them the prescription my OB had provided, and a few days later, I received an email outlining my options, with images of the pumps and links to product pages to help me decide. I replied with my selection, and my pump was ready for store pickup two days later. Easy peasy nipple squeezy.

Don’t pay for your pump out of pocket. Don’t waste time getting the runaround from your insurance company. Have Target do it for you!  Click here for more information about the program.

Disclaimer: All opinions are my own, and I have not been reimbursed for this post –  I just take great satisfaction in making health insurance companies pay up and pay out!