This morning, at a conference, a healthcare executive spoke about preventable harm and asked everyone in the audience who had been on the receiving end of a clinical error, either personally or through a loved one, to stand. The percentage who stood was sobering – and I was among them.

I’ve been working in health care for about three and a half years. For most of that time, I sat next to a Clinical Excellence team committed to eliminating preventable harm, and I learned quite a bit about event reporting and process improvement simply through proximity.

I’m also intimately familiar with the many times we have received poor quality health care. Every error made in caring for my son is burned into my brain.

But before today, I had never stopped to really let soak in the extent of the preventable harm we’ve experienced, the magnitude of its impact on L and our family – and the lack of action that came from it.

L’s journey began more than six years ago, at a time when I had never heard of his diagnosis, let alone the ins and outs of event reporting and preventable harm. Many of our “events” seemed like just another hill to climb in a journey across mountains. I was upset that someone had been careless, had made things harder for us during the hardest stretch of my life, and then I moved on to deal with the next thing that inevitably came. But in retrospect, many of these were events that should have been reported and corrected. Many of them were events that caused, or had potential to cause, real harm in our lives.

One day in the NICU, after I had spent a full 24 hours around the clock implementing a strict wound care regimen to heal the damaged skin around L’s ostomy and had made a lot of progress, I left to teach a seminar. While I was gone, L’s nurse (not one of our regulars) ignored the detailed instructions she’d been given at shift change, and which I had reiterated before I left, for the sake of letting him sleep. When I returned less than five hours later, his belly was raw, weeping and bloody. I set about starting the process of healing all over again. To my knowledge, this was never reported.

Another time, later, L had been admitted for a 48-hour blood infection rule out. He had an ear infection, but with a central line we had to be cautious. Upon discharge, a young nurse disconnected his infusion – a task I performed daily at home, but wasn’t allowed to do in the hospital since I lacked the proper certification. She removed the microclave, which is the first and primary barrier to germs entering his line and should never be removed during a simple disconnect, let his line drop against his chest completely uncapped and gaping open, and prepared to send us on our way. Me – a graduate student in literature who had no clinical training and hadn’t slept in 48 hours – me and my quick action to replace the clave myself was quite possibly the only thing that stood between her error and sepsis. My mama bear reaction startled her, and I imagine she never forgot to replace the microclave again; but I’m equally certain this near-miss was never reported.

And then there’s another example that in retrospect is perhaps the most egregious I’ve experienced personally, and the one I’ve been dwelling on all day. L spent 131 days in the NICU; we and our amazing NICU team worked very hard to get him well enough to come home, and to make ourselves capable enough to bring him home, as he was still infusing TPN 18 hours a day and we had to learn to manage that. So when we got home, we sanitized the house, locked the doors, and did everything in our power to keep him healthy and out of the hospital.

We made it 30 days. And then, in L’s second month home from the hospital, he was readmitted multiple times. His line kept occluding every 8 days, like clockwork, and the blockage wouldn’t respond to TPA, so it was replaced, and replaced again, until a seasoned nurse finally dug into the far reaches of her experience and used hydrochloric acid to clear his line. To this day I have no idea if pushing hydrochloric acid into the central line of an infant would alarm most clinicians; but I know that it terrified me.

The occlusions, it turned out, were a result of our home infusion pharmacy mixing his TPN improperly. The chemicals were reacting with each other to cause a buildup inside his central line, which explained the perfectly regular schedule of his line filling with what might as well have been cement. 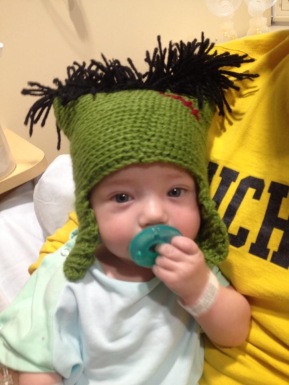 Our little Frankentestine, 5 months old, awaits a surgery he never should have needed on his very first Halloween.

Due to that error, we experienced three completely preventable inpatient stays – the first on his very first Halloween. My 5-month-old son (just 3.5 months adjusted) had two completely preventable surgeries, two completely unnecessary trips into general anesthesia. He missed a full cycle of TPN, his only real source of nutrition at the time, three times, which is equivalent to an infant fasting for 24 hours on three separate occasions. He gained no weight that month, and grew no inches. His little body was exposed to hydrochloric acid in a channel that, when unclogged, led straight to his heart. And I spent months afterward flying into a panic at the sound of a beeping alarm – on his pump, on our coffee maker, on the washer and dryer.

All of this was completely avoidable, if only someone at a pharmacy had done their job properly. Our medical team’s solution was to switch home infusion pharmacies, and it worked – for us, which was all I had the emotional bandwidth to think about at the time. But to my knowledge, the original pharmacy never knew (or admitted) the harm they had caused, and continued with their processes unchanged.

I know healthcare is delivered by humans, and we all make mistakes. But the number of deaths each year in the U.S. in which preventable clinical error is a contributing factor is equivalent to a jumbo jet crashing every day with no survivors. Every. Single. Day.

We’ve met a lot of incredible clinicians along the way, to whom we owe L’s life and our sanity. We can never repay them for what they’ve given us, and we know that the vast majority of people who work in healthcare want to help, no matter how expertly or poorly they deliver on that promise. So I’m trying to stay true to the foundational quality improvement principle that you should focus on fixing the processes that allow mistakes rather than blaming the people who make mistakes.

But tonight old angers are bubbling fresh. And tomorrow I return to work with a renewed commitment to do whatever I can to help shape healthcare for the better.